What a crazy month.

GameStop has been the talk of the week and for good reason. GameStop’s ($GME) stock price has literally 80x’d in the past year and has increased 17x year-to-date. I must admit my good fortune, where I got in around $12 back in October after listening to a Motley Fool podcast about it and figured it was worth a flier. Little did I know that this stock would be the talk of the world in just a few months. What’s even crazier is that I bought a basket of Wall Street Bets meme stocks just for fun since I had no idea which would take off and it turned out to the perfect hedge for my growth stock portfolio: 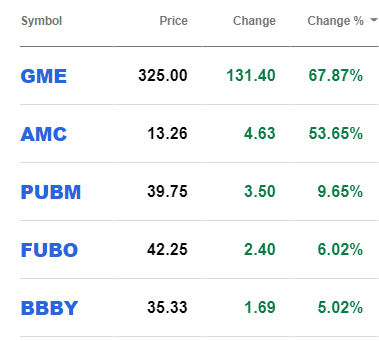 I had a pretty fantastic month. I finished the month up 23% or so (final numbers won’t be ready until mid-next week since Fidelity takes forever with their calculations). It hit a high around 30% intra-day on January 22 when tech stocks started soaring.

I made a decent number of trades this month, some notable positions I started or added to: Nio ($NIO), The Container Store ($TCS), Teladoc ($TDOC) and a basket of meme stocks: AMC ($AMC), Blackberry ($BB), Bed Bath and Beyond ($BBBY), and GameStop ($GME). I also traded a decent number of options this past week given the implied volatility of these meme stocks. You could write a 1-week covered call on $AMC for $200+ which is 20%+ of the total position!

I made a small investment in this position largely because I think The Container Store may have just hit their stride after years of wavering. Specifically, the Netflix hit, Get Organized with The Home Edit brought a lot of awareness and interest in the company which enabled the company to significantly pay down debt in their Q3 earnings call and raise guidance significantly (5% to “high-teens”) when they announced a new CEO this past December.

The Container Store has seen its shares increase 200%+ the past year or so but I believe there’s a ton more upside largely because they’ve been able to reduce debt pretty materially in the last few months which should be an EPS tailwind and they’re starting to see some really strong same-store sales and increases to total net sales.

I normally don’t invest in brick & mortar retail stores but after a friend told me about this stock, where I just kinda shrugged it off initially but then decided to take a deeper look to get some experience in analyzing stocks with P/E ratios, I think I found a hidden gem.

This is a company that has struggled to grow TTM EPS for years but in Q2 (they are one quarter offset because of the way they structure their fiscal year), they finished the quarter with $0.41 EPS which is the total EPS they normally generate in a full year! They then guided conservatively since their holiday sales historically have been softer than expected only to raise guidance by 3x+ after their new CEO announcement. They guided for adjusted EPS of $0.35-$0.40 which I believe should translate to $0.30-$0.35 but I think it’s going to finish around $0.40 which would basically double their TTM EPS and likely cause the stock price to spike (even after a 40%+ YTD return).

I honestly don’t have a lot of experience analyzing companies with GAAP EPS, but I’m pretty sure my math checks out and my assumptions are conservative. They announce earnings on Tuesday, February 2nd, so I guess we’ll see how accurate my assumptions were.

First, let’s be clear, there is no way that I believe that GameStop’s current market valuation is realistic. $325/share is outrageous normally. However, I do believe that 7+ M loyal redditors with a chip on their shoulder after Robinhood’s restrictive trading measures they implemented Thursday combined with a short interest of 120% and potential gamma squeezes can result in significant share appreciation. I personally think $750+ is doable. Funny, how I thought $65 was too high just last week. I guess I learned my lesson when I learned more about delta hedging, gamma squeezes and saw the subreddit WSB increase from 1.x M to 7+ M.

Hold the line, comrades. 💎🙌. Beautiful tendies are on our way.

EDIT 2/3/21: Well, I guess I should’ve trusted my initial instincts.

Atlassian is one of the OG’s when it comes to project management software. They are used around the world by millions of people due to their famous JIRA product and their beloved Trello product.

They announced earnings this past Thursday, and it was a beautiful beat and for once Atlassian didn’t tank too bad after earnings. In fact, they actually finished positive for the day and likely would’ve done better if it wasn’t for market volatility.

I haven’t had a chance to read their earnings call transcript, but I did see that they increased revenue by 23% YoY and sequentially grew revenue 9% which is huge compared to their more recent quarters. Their free cash flow margin increased to 36% from 13% as they continue to amaze me with their ability to generate such strong FCF Margins. Total customers saw some acceleration with an 18% YoY increase and 6% increase sequentially, which is the highest sequential growth they’ve seen in customers in 1.5 years.

I’ve owned Atlassian since $30 and I’ve slowly trimmed my position due to valuation concerns and doubting their ability to continue to grow their share price given their slowing revenue growth. I’ve been very wrong but fortunately, I still own a reasonable number of shares, just not as much as I’d like given that this is a 7-bagger in just under 4 years.

It’s been a terrific start to the year but definitely a lot of drama going on Wall Street now given the meme stocks and Robinhood’s trading restrictions. The market volatility and huge sell off the past few days has resulted in the CNN Fear & Greed Index to decrease to 38 from the “extreme greed” territory (I forget the exact number). I’ve observed that the lower the number, generally the more upside stocks have compared to the inverse of course.

The January Jobs report will be released this next Friday which should be interesting given December’s poor jobs report. With the economy slowly recovering, vaccines distribution accelerating, a potential major stimulus, solid earnings growth and the Fed planning on keeping rates low for the foreseeable future, I am hopeful that this bull market can continue well into 2021.

I’m very excited about what’s going to happen to the meme stocks next week. Plus, I assume there will be a mass exodus from Robinhood in the coming weeks given all the total outrage they caused on Thursday. Google Trends is showing some huge search growth trends for their rival brokerages:

Finally, earnings season has just gotten started, so I’m looking forward to reading and reviewing a lot of the earnings transcripts of the companies I’m invested in. I wish Zoom and CrowdStrike would move up their earnings calls, since they’re generally in early March.