I talk to a lot of people about investing and personal finances. Yes, I know, talking about money can be taboo, but I suppose I don’t really care. There are far too many people that need help with their finances and I think it’s a far bigger crime to not say anything when you have a wealth of knowledge to share. While I realize my blog is often very technical, I am also trying, albeit slowly, to write content that is more relevant to someone starting out.

If this is your first time reading my blog, let me just say that if there’s one thing you take away from my blog, it’s this: Invest your money. Put your money to work.

There are simply far too many people who only invest in their 401ks (and more often than not, they don’t max it out) and then throw the rest of their money into a checking or savings account and have their savings get eaten by inflation.

I also understand there are a lot of people with credit card debt, student loans, car loans, etc. When it comes to debt, my rule of thumb is to pay off high-interest debt ASAP (anything with an interest rate of 5% or higher), make the minimums on < 5% debt and invest the rest (assuming you already have a 3-6 month emergency fund).

I understand that market volatility is scary but if you don’t have anything better to do with that money, you can’t go wrong with just sticking it in the market (market being a low-cost index fund tracking the S&P 500) for a few years, ignoring the day-to-day movements, and seeing what happens since the market on average increases 6-8% every year.

Moving on, most people believe you can’t beat the market, so why bother? They think, just invest in the S&P 500 and move on. I agree that many people can’t beat the market and that’s largely due to trying to time the market, day trading, selling too early, holding on too long, etc. I personally believe if you do the proper research and focus on business fundamentals, I think it’s definitely possible to beat the market. Heck, you can subscribe to a newsletter like Motley Fool and if you stick with their top recommendations, you can probably beat the market more often than not. It only takes one big winner to carry a portfolio. However, individual stocks may not be for everyone and that’s perfectly fine. As long as you are investing your money in the market, you’re doing just fine.

To some, that 30% difference “takes too much time” and others may think “it’s not enough.”

There are two points I’m trying to make:

The economy seems to be chugging along. While the September jobs report was pretty disappointing, other economic indicators were still very positive. PMI data continues to be in expansion territory for both services and manufacturing which means that a recession isn’t likely in the short-term. Also, early Q3 earnings releases have been very positive, where most companies have been beating expectations.

There are two big announcements this week that I’ll be watching that may cause some volatility in the markets:

Wow, bitcoin and ethereum plus a bunch of altcoins had quite the rally in October. I think there are a few reasons for this:

I don’t follow crypto nearly enough like I used to, but these are some things I’ve read. Who knows what’s really behind the rally. My allocation to cryptocurrency remains around 5% or so.

I also wanted to comment on the bitcoin futures ETF. Money for the Rest of Us, which I am a subscriber to, had a good podcast on whether or not you should invest in the bitcoin futures ETF. Basically the podcaster, David Stein, thinks it’s not a great idea largely because of the negative roll yield which can result in a big amount of losses if bitcoin doesn’t keep going up every month in which bitcoin has a tendency to trade sideways for a few months.

It’s been a pretty incredible month where I saw my portfolio hit another all-time high in the middle of the month before a little bit of volatility dragged it down near the end. Either way, finished the month with an impressive 53%+ YTD return vs. the S&P’s 22%+.

Upstart didn’t do much by the end of the month, finishing the month only up less than 1%, but Cloudflare ($NET), CrowdStrike ($CRWD), Affirm ($AFRM), DataDog ($DDOG), Nvidia ($NVDA) all outperformed which helped lift my entire portfolio by a considerable amount.

Snap ($SNAP) – Wow, this massacre was totally unexpected. This reminds me of when Fiverr melted down. I didn’t expect iOS 14 to wreck so much havoc on social media platforms, but apparently it did. I do believe Snap has other tricks up its sleeve and they have one of the most engaging platforms out there, but I basically sold out of 95% of my position after the earnings release. Disappointed for sure and given the position it was a major drag on my portfolio’s performance unfortunately.

Amplitude ($AMPL) – I initiated a < 1% position in Amplitude to just test this position out before earnings. I suppose that was a very good decision since my cost basis was around $52 and they’ve rallied to $74, so a solid 40% return in a little over a month. I’m not actually sure how I heard about Amplitude, but when I heard that one of their competitors was Pendo, I decided to initiate a position after reviewing their financials and the fact that I know Pendo is absolutely crushing it and Amplitude is a formidable competitor of Pendo’s.

Some notes about Amplitude:

All in all, this is an impressive company that seems to have a lot of tailwinds going for them. Actually, just writing this entry encouraged me to buy my shares and I did just that.

Crocs ($CROX) – I did a quick analysis of Crocs right after they released their Q3 ‘21 earnings and I added slightly to my position given the strength of the report. Their adjusted operating margins are pretty impressive and despite all the global supply chain issues, management seems to be navigating the issues just fine. While this isn’t a huge position, it’s incredibly rewarding to pick a stock and do a bunch of analysis on it and to see it go up, and go up a lot.

Upstart ($UPST) – Yes, I know, Upstart is a HUGE freaking position. Part of it is due to the huge run up it’s seen since I initiated my position. My average cost basis is around $128 for shares and I bought a boatload of options of all sorts. Yes, I’m confident in this position and there hasn’t been any sign of this company slowing down. The stock dropped 25% or so from $400+ to $322 through no fault of their own but rather due to analysts downgrading the stock due to valuation. When Upstart fell to the $320s, I actually added more to my already oversized position.

Since its last earnings release, Upstart has started moving into auto loans and released Upstart Auto Retail, an AI-enabled platform. Since the auto loans market is huge, this greatly expands Upstart’s TAM and it will be interesting to get a read on what Upstart’s management thinks about auto loans’ contribution to their revenue in 2022.

Upstart also developed a few noteworthy partnerships, the one that I figured I’d mention is with Berkshire Hills Bancorp which has $11.7 billion in assets.

Finally, I want to note that Upstart is a technology platform and is not actually taking on loan default risk themselves. They are obviously exposed to the lending market in the sense that they generate the majority of their revenue from referrals or banks leveraging their platform.

Specifically per their S-1, this is how they make money:

Upstart’s revenues are primarily earned in the form of three separate usage-based fees, which can be either dollar or percentage based depending on the contractual arrangement. We charge our bank partners a referral fee of 3% to 4% of the loan principal amount each time we refer a borrower who obtains a loan. Separately, we charge bank partners a platform fee of approximately 2% of loan value each time they originate a loan using our platform. These fees are contracted for and charged separately, although they are generally combined for accounting purposes as they usually represent a single performance obligation. We do not charge the borrowers on our platform any referral, platform or other similar fees for our loan matching services.

We also charge the holder of the loan (either a bank or institutional investor) an ongoing 0.5% to 1% annualized servicing fee based on the outstanding principal over the lifetime of the loan for ongoing servicing of the loan. Taken together, these fees represented 98% of our revenue in the nine months ended September 30, 2020. In addition, we earn a small portion of our revenue from interest income and our securitization activities.

Here’s a picture of how much revenue in fees they generate from referrals and bank sourced loans:

Upstart announces earnings on November 9th and per their guidance, analysts are expecting $210 M at the midpoint. However, I’m thinking they will do closer to $265-300 M which would be a 35-55% QoQ increase in revenue and 300% YoY increase.

Here are two additional graphs that note the search volume of “Upstart” and it’s pretty impressive: 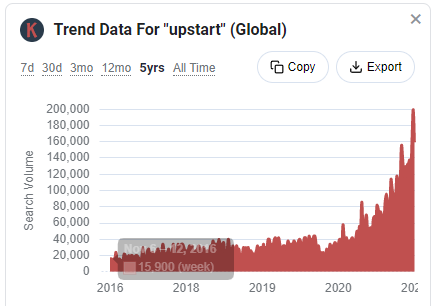 I’m a little behind on some of the articles I’ve been meaning to write. I definitely am trying to find time to write about asset allocation since a lot of people have asked me about this. This is especially important when you are investing in your 401k where most 401k plans don’t give you the ability to invest in individual stocks.